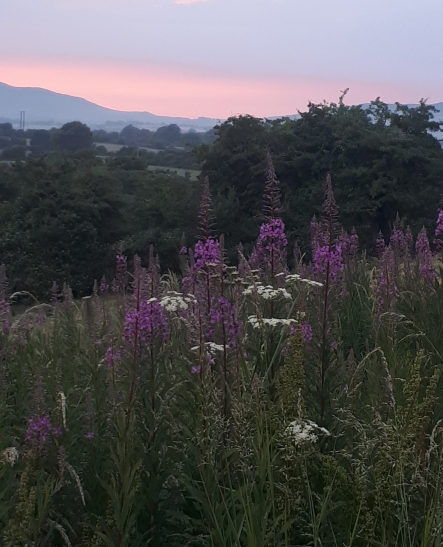 We’ve just come out of the longest heatwave I can remember in Ireland, amazing sunshine every day is not something we are used to around here! So you can imagine we’ve spent more time than usual outdoors, and not much sewing has been happening. I have been knitting and made an attempt at joining in with Kate’s knitalong but progress has been slow and there’s not much to show and tell there!

So for now I’m sharing some pictures of a finished sewing object – I’ve made 2 versions of this shirtdress,  it’s Simplicity 8014 and they’ve gotten a lot of wear.  I think I first saw this pattern on Beth’s sewing blog – Sunnygal Sewing Studio. If you’re not following her, then I definitely recommend it – lots of very useful sewing information from a lady who knows her stuff!

I made a few changes from the original and took some photos as I went . The picture below is of the dress inside-out on my dressform: 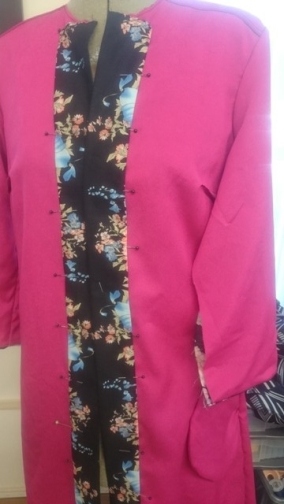 I used a black and floral cotton fabric that I bought from the remnants bin, and a lightweight cerise pink poly crepe to line it.  It’s mostly underlined (when both fabrics are held together and treated like one piece), except at the hems and side seams, where the lining hangs separately. I’m sharing a few pics that show how I treated the pockets, which are held in the side seams.

Instead of making two separate pockets from lining and fabric, I joined them together from the beginning so that all the raw edges are hidden.

Using 2 pocket pieces cut from fabric and two from lining, I laid them with the fabric pieces right side together, and then two lining pieces on top :

After sewing through all four layers, I trimmed away the excess fabric from the curved edges.

Then snipped as far as the stitching at the opening edges as below:

I joined them to the shirt side seams on the main fabric. When I was sewing up the lining side seams, I left the pocket opening in the seam and pulled the pocket through, so that it hangs on the inside of the dress, rather than between the dress and lining. The lining can then be hand or machine stitched to the pocket edges.

Pocket bag hanging on inside of dress – before ironing!

So there you are, hopefully it’ll be of use to someone! I do still have to finish my burda cape-jacket, but it’s parked up for now, while I decide if I need to shorten it before adding the buttons,  it could be a while before that shows up as a finished object!

I’m sharing some construction notes for my Simplicity 8014 dress that might be useful for anyone considering making it. 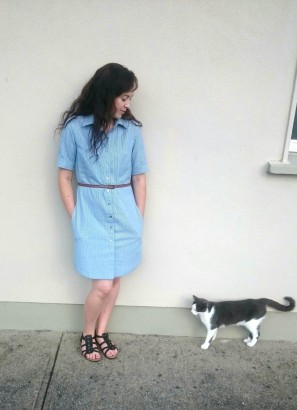 If you are pear-shaped, or normally need to add to patterns at the hips, then carefully measure the pattern pieces as you may need to go up more than one size at the hips.

I made this with french seams on the sleeve and side seams – they could also be overlocked or bound.

The sleeve hems feature a neat tuck, which traps the raw edge of the hem inside the tuck.

The pattern instructions didn’t make sense to me at first – I couldn’t picture the outcome, but I followed along with the pattern steps and they worked out fine. 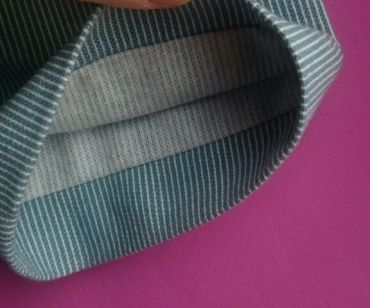 The dress hem is curved at the sides, and is finished with a shaped facing. The instructions were mostly fine, but I changed how the facing attaches at the centre fronts. The pattern step included some hand sewing.

I didn’t follow the pattern for button placement, as I wanted to wear a belt without it catching on a button every time I sat down. So I marked the button placement with pins, while I was wearing the belt. 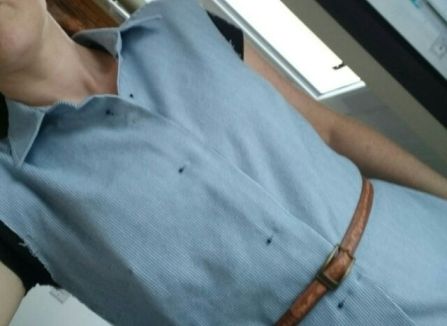 I also didn’t have enough buttons to get as close to the hem as I would have liked, instead I top-stitched just below the last button, to keep the hem from flying open in a breeze!

(You might notice that the last button doesn’t have a buttonhole – it’s just stitched on through all the layers – that’s because I found that button under my sewing machine when I was tidying up after myself!)

And that’s as much as I remember, hope it was useful! I’m on the lookout for more fabric to make this again, I could see it becoming my winter uniform – layered up with boots and tights 🙂

This shirt-dress is one of those makes that as soon as you finish, you start planning the next version.  I made it in fits and bursts over the last two weeks, and wore for the day on Sunday. It was really comfortable, but felt and looked like I’d made a bit of an effort! 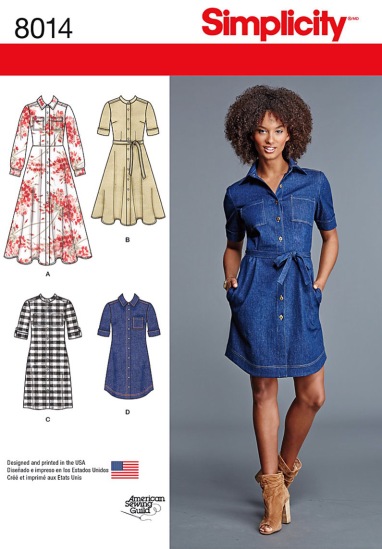 To start with – here’s a picture of it worn with a belt and accessorised with  a cat….

The pattern is Simplicity 8014 – I made very few changes – just adding my usual 1cm to the shoulder at the armhole edge to straighten the slope. I didn’t move the armhole up, and it doesn’t affect the fit – it probably made inserting the sleeve easier as there wasn’t much need for easing in the sleeve cap.

It’s made from a soft cotton with a pale vertical stripe – not as obvious in the pictures as in real life.  I cut a size 10 in the bodice which I tapered out to a size 12 at the hips – which I always think is pretty useless information, unless you know what size body it was made to fit !!! So, in the hope of it being useful to someone else – my body measurements are approx 33 -28 -38!. The fit has just the right amount of wearing ease – not too much extra fabric around the waist, so it sits nicely with a belt.

I cut out the self fabric belt and didn’t sew it at first, but after seeing the pictures, decided it’d be good to have the option of the matching belt, and then I managed to find a leftover piece of fabric big enough to make a pocket, and attached that as well. 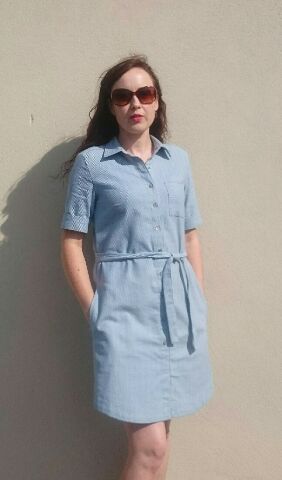 The sun has washed my skin out so much that it looks like I’m about to blend into the wall!

I did try wearing it without the belt – I liked the loose fit (and really love those pockets!) – but my daughter thought the combination of the pale blue colour and shape, made it look like a night-shirt! 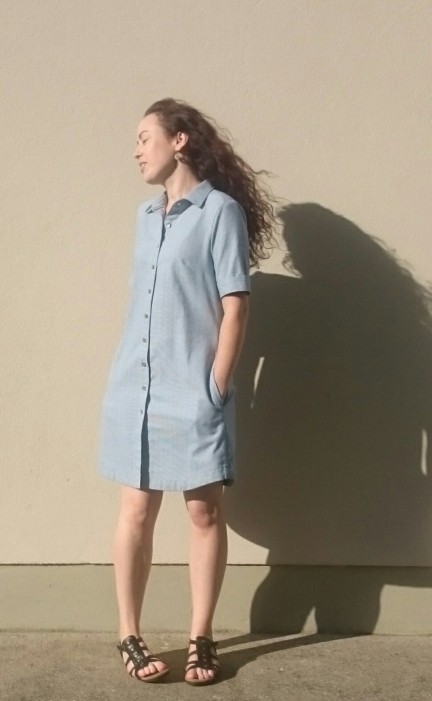 wandering around in a nightie…as you do…:)

It was great to get such a wearable result without the effort of a muslin – I’m honestly too impatient to make one, unless the pattern pieces are very complicated – it’s just easier to measure the paper pieces and compare the shape to patterns that I’ve already made.

I had also planned to get some pictures of my finally finished burda dress while the weather was so nice, but I ran out of chocolate to bribe the little photographer -” ah no, do I really have to take more pictures?” (… said with an eyebrow in the air and a look of misery!) … they were getting more crooked and out of focus with every minute that passed , so I quit while we were ahead 🙂

At least I’m pretty sure it was summer …we swam in the sea and used sunscreen for the first two days of this week…..but right now it’s raining heavily on my wetsuit that I left outside to dry!!

Made using Simplicity 2599 – I also used the same pattern here and here. On my first version of this pattern I straightened the shoulder slope to match my shoulders, and it’s now my favourite pattern for a quick make.

For this top I rotated the bust dart to sit horizontally across the centre bust ,and left the extra  drape that this created at the lower front, so that it is pretty loose-fitting
from the bust down. There is a useful explanation of rotating a dart on Megan Nielsen’s blog .

The fabric is a very lightweight cotton that was cut from an old dress that didn’t fit anymore. The armholes and neck edge are finished with bias strips and the side seams are french seamed.

It’s good to finally have some sewing to show. I’ve also pulled out a few UFO’s to finish… does anyone remember this dress? After seeing a lovely orange version made up on Catherine Daze’s blog, I went back to my blue version – and now it’s almost done , so fingers crossed that I can get outside on a dry day for some pictures!