Have you seen the April Burdastyle Magazine?  It’s the best I’ve seen in a long time.   Finally some interesting designs worth tracing off !   In fact, as soon as I got it home, I traced off this number: 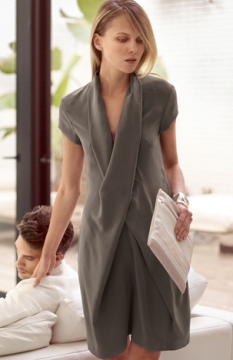 I love the fold over detail at the front – not sure I like how it is folding in at the legs, I’ve noticed a few other bloggers mentioning it too. I’m hoping that I can figure a way to make it look better. 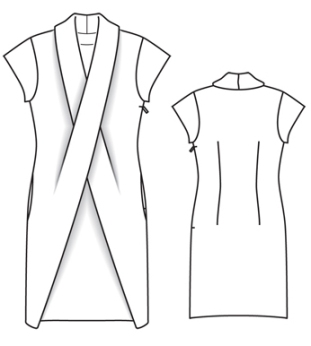 It’s also shown as a top in printed fabric.   Which I think I could always shorten it into, if the dress doesn’t hang nicely.

I’ve had some dark blue crepe de chine ( poly – something , definitely not silk!), in my cupboard with over a year.   It was just waiting for this kind of pattern.  So far I’ve begun to assemble it and, even though it is illustrated in the pull-out section, it is still a little bit of a head scratcher.

My measurements almost match the size 36 ( bust & hips –  my waist is always closer to the 38).   I cut this as a 36 as it looks to have enough wearing ease to allow for a larger waist ( but I added a half inch to the side seams just in case)

This is what the folded front piece looks like : 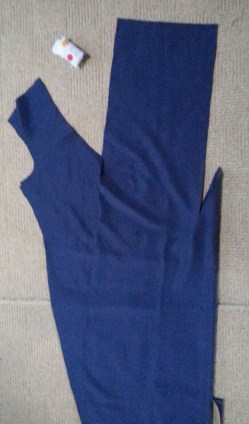 I rarely use chalk to mark darts or dots, instead I pin right on the dot and then sew to where the pin is.

Here’s the front piece opened out . The rectangular shapes are the draped front & collar pieces.

The drape pieces are folded in half toward the centre of the dress and stitched from the marked notch to the dot at the end of the v , and back up to the centre front. 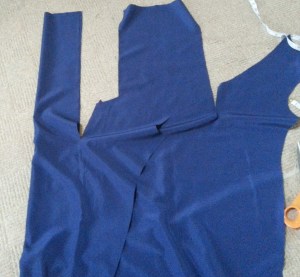 Here is how the centre of the dress looks after stitching:   The instructions tell you to fold down the tip of the centre front piece before you sew. 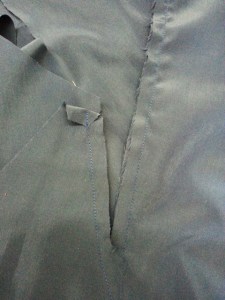 And here is the right side : 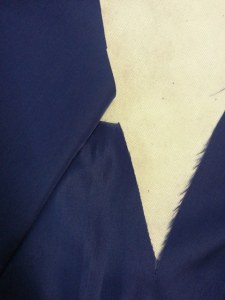 The wrong side again after both sides have been stitched:  The instructions tell you to reinforce the v points before stitching ( which I forgot to do) And then to snip into the v as close to the stitches as you can. 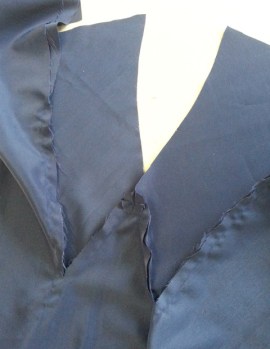 Then from the right side you need to reach in pull the drape pieces right side out and then press: 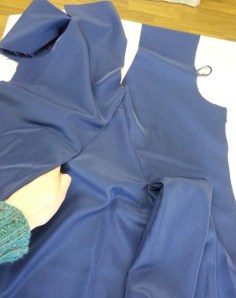 How it looks after both sides have been pulled through:

The next part of the magazine instructions were a bit confusing to me,  I’m not sure if it was tiredness on my part or that the pictures threw me off slightly.  But it took me a minute to understand that I was to partially baste each draped piece to the front neckline.

Lining up notches, I then pinned and basted some of the way along the front neckline: 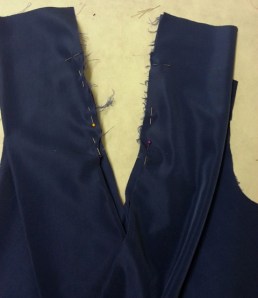 After that I sewed the darts in the back piece, and then basted the side seams and shoulder seams. I also basted in a sleeve. 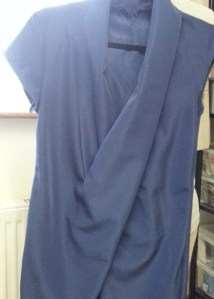 And then it was ready for trying on….. no pics I’m afraid as it was pretty late at that stage.  The fit was pretty good, it has nice shaping in the back. Although it calls for a side zip, I was able to pull it on without any trouble, so I might not bother with one.

The centre front skirt is going to be an issue. It is pooling oddly around the legs because the folds are opening out.  So far,  I have two options of fixing it that I’m trying to decide between.   Either I follow the line of the draped piece with a line of stitching on the right side to make them like angled pleats . Or I stitch the folds on the inside so that they don’t open up.  I came across a good example of how to do this on the ‘Off The Cuff’ blog-  Here’s a wonderful tutorial on controlling a bias pleat

I’m experimenting with it and will have it figured sooner rather than later, as I really want this finished in time for my Hols next week !