So finally a bit more sewing around these parts! Although it seems like all I’ve been doing lately is knitting, I have managed to squeeze in some sewing too!

I have a lot of sewing books gathering dust, that I mostly use for inspiration or techniques.  I bought Lisa Lam’s book ‘ The Bag Making Bible ‘ when it first came out but hadn’t used any of the included patterns until now.  I needed a new cross-body bag as the one I was using was very big and starting to show signs of wear.

The size of the ‘Piping Hot Hobo’ looked about right and I decided to recycle some old trousers in the process too:

I didn’t have any piping cord to hand, so I dug out some pieces of cord that I had kept from old gift bags:

I had just enough to use to pipe the edges of the bag, for which I used a sturdy black cotton. The outside of the bag was made from the heavy twill trouser fabric and then a linen/cotton mix for the bag flap.

I like having a phone pocket on the outside of my bags (for easy access) so I added a pocket that had been cut from another old pair of trousers: :

I used the original flap and the pocket bag – the pictures below will give you an idea of how I inserted it.  On the fabric right side I pinned on some interfacing ( glue side up)  and drew a rectangle and then stitched around: 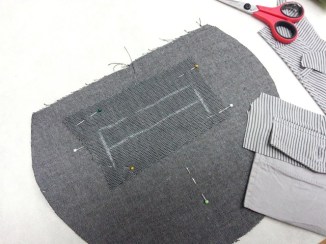 I then cut into the rectangle and turned the interfacing through and pressed back the edges:

Which gave me a neat rectangle to pull the pocket flap through: 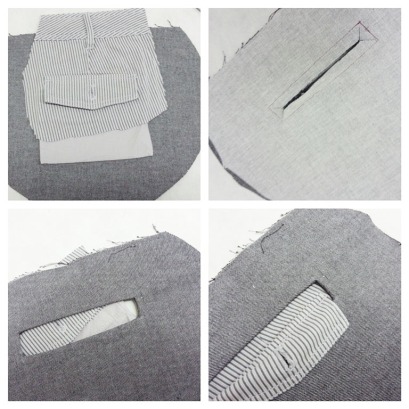 I used a decorative stitch with red thread. 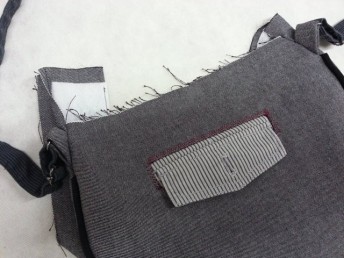 The bag came together easily enough following the instructions in the book. The only thing to be aware of is that the gusset piece is much too long and had to be trimmed down ( you can see it in the picture above ).  I added some extra pockets to the lining, which I made from old curtain fabric, and a clasp to catch my keys.  My pet peeve is losing keys in my bag! 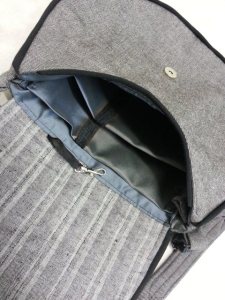 And if you’re wondering how it looks on? Here ya go!

Not bad for a pair of old pants and some curtains lol!